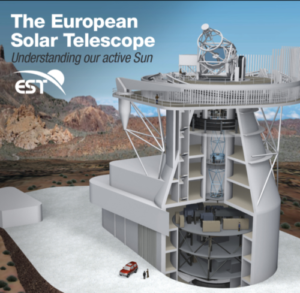 The study of the Sun is fundamental for understanding the dynamics of biological evolution on our planet and for predicting and planning the future of our natural environment. Solar meteorology and climatology play a role of primary importance for the assessment and control of climate change on Earth and for the design of space missions, in particular the manned ones. Moreover the analysis of the Sun allows to deepen knowledge in other astrophysical fields such as active stars, black holes accretion discs with magnetic phenomena, stellar plasma jets, exoplanetary systems with a central star.

In order to offer solar astronomy a new generation instrument, with characteristics and performances far superior to those of the existing systems, EAST has conceived an innovative European Solar Telescope (EST) that should be developed, built and made operational on the Canary Islands (Spain) within the next 10 years, to exploit the synergy with the DKIST apparatus (Daniel K. Inouye Solar
Telescope, Maui USA) and future missions dedicated to the study of the Sun launched by major space agencies: ESA (Solar Orbiter), NASA (Solar Probe) and JAXA (Solar C).

The EST project, coordinated by the Instituto de Astrofísica de Canarias, is the result of an extensive collaboration between 29 European partners, 14 of which are scientific institutes and 15 industries. The Italian participation in the planning phase involves six INAF (National Institute of Astrophysics)
Observatories: Arcetri, Catania, Rome, Trieste, IAPS-Rome and FGG-TNG and five universities (L’Aquila, Calabria, Catania , Florence and Rome Tor Vergata), with the industrial consultancy of SRS (Research and Development Services) Engineering Design S.r.l.

EST aims to examine the solar atmosphere from the photosphere to the chromosphere and the low corona, obtaining a simultaneous 3D overview for different atmospheric layers. The dimensional scale of spatial resolution will be of the order of about ten kilometers, corresponding to that of the average free path of photons in the solar plasma; the direct observation of the interactions between photons and star plasma will provide information on the modalities of storage, transport and release of the magnetic energy by the plasma, helping to clarify the phenomena of solar dynamo, from the generation of the magnetic field to its variability, instability and cyclic inversion, and the associated processes that give rise to localized convective structures such as sunspots, faculae, prominences, arc connections and sudden manifestations such as flares and coronal mass emissions. The prediction of solar storms, which are fatal for space missions and for satellite devices, will therefore be more accessible.

In addition, the telescope will remain operational for several decades, allowing to study the solar emission in various bands of the electromagnetic spectrum, on larger scale times than the characteristic eleven-year cycle, in order to improve the radiative transport models and the description of the thermal properties of the chromosphere and corona, which have higher temperatures than those of the underlying layers. The analysis of the correlations between the variations in the magnetic activity of the solar atmosphere and the total radiative emission that reaches our planet is of crucial importance for climatological studies to safeguard the ecosystem.

EST will be a revolutionary instrument in many ways. Characterized by a Gregorian configuration in axis, that is with a parabolic primary mirror and a concave ellipsoidal secondary, located on the optical axis beyond the first focus, the telescope will be equipped with a primary mirror with an aperture of 4.2 meters, never reached before, which will maximize the amount of radiation collected, while minimizing the measurement error related to photonic noise.

Various focal plane instruments will be able to operate simultaneously, in the wide spectral range between the near ultraviolet (UVA) and the near infrared (NIR), making it possible to observe interaction processes between plasma and solar magnetic field until to the scales of the average free path of photons in the photosphere plasma. In order to reduce the telescope’s exposure to direct sunlight and to atmospheric turbulence due to soil heating, the apparatus will be built in the open air to exploit the natural inflow of air currents; the structure must be extremely rigid to support winds with an average speed of about 54 kilometers per hour.

The atmospheric distortions, induced by turbulent fluctuations of the air refractive index, on the planarity of the incident wave fronts, will be corrected by a multi-conjugated adaptive optics system (MCAO) integrated in the optical path of the telescope between the primary mirror and focal plane instrumentation. It will use multiple reference sources and multiple compensating elements (at least two sensors and five deformable mirrors) in order to map and correct the disturbance on large areas of sky, in this case two arcminutes of field of view, and to send correct images to the Coudè focus simultaneously for the different instruments, with a high frequency of reconstruction of the wave front. This device will make it possible to exploit almost completely the high resolving power determined by the diameter, about 25 milliarcseconds in the visible, corresponding to almost 20 kilometers on the surface of the Sun. The performance of the apparatus on the ground will thus be comparable with those of a space telescope.

A sophisticated cooling system will mitigate the absorption of a quantity of solar radiation oscillating between 5% and 15% of the total by the primary mirror; in fact, heating would generate local and global surface deformations of the reflecting material, producing also convective motions of hot air or bubbles, causing seeing. Using 2D and 3D CFD (Computational Fluid Dynamics) simulations, it was possible to design an air knives device able to touch the surface of the mirror and direct the heated air towards a suction point, preventing the bubble formation.

The first fire, at which an image of the sun of about 6 centimeters of diameter will be formed, will have to bear an input thermal load of about 4.5 megawatt per square meter, a surface power density almost ten times higher than that released on average by a nuclear fuel bar. Not being possible to use heat absorbers, which would require large dimensions of the order of one cubic meter, a heat trap will be placed at the point of thermal concentration. It will discard the radiation from the solar regions excluded from the analysis, and will be reflective and equipped with a futuristic air-water heat exchanger, at high speed, for cooling, specially modulated to avoid condensation; there will also be devices for the extraction of hot air in the optical cone.
The EST focal plane instruments will allow the simultaneous study of different levels of the solar atmosphere, offering a three-dimensional vision.

The post focus instrumentation will consist of a Broad Band Imager (BBI), a Narrow Band Tunable Filter (NBTF) and a lattice spectropolarimeter.

The BBI will provide images in three spectral channels, with wavelengths in a range between 390 and 900 nanometers, with a fast temporal resolution (50 images per second) and a spatial resolution of 0.04 arcseconds (corresponding to approximately 30 kilometers on the photosphere), in a 2 arcminutes side field of view. Thanks to the efficient performance of the adaptive optics of the EST telescope and the ability to frame large portions of the solar surface, two alternative operating modes for the BBI, with high resolving power, and a wide field of view will be possible. The light will be oriented on three separate detectors via beam separators, and the wavelengths will be selected with the use of appropriate interferential or etalon filters.

The NBTF will be equipped with two-dimensional spectrographs that will provide almost monochromatic images at various wavelengths characteristic of the different altitudes of the solar atmosphere, with a spatial resolution of 0.04 arcseconds that will reach the diffraction limit of the telescope. The extended field of view with a side of about 60 arcseconds and the fast temporal resolution will allow to accelerate the time of acquisition of the images and application of the corrections of atmospheric seeing. These performances will be guaranteed by the latest generation Fabry-Perot interferometers, which will combine a large diameter, 200 – 300 millimeters, with a high optical quality, in line with that of the telescope, obtained by limiting variations in the distance between the foils within 30 – 40 nanometers. INAF has elaborated for EST the project of a two-dimensional spectrometer in the NIR that uses two Fabry-Perots of 200 millimeters in series. The NBTF will also perform accurate polarimetric detections.

The complex lattice spectropolarimeter, which may observe a spectral range between the visible and the NIR, will present four different possible configurations, variable according to the observational needs. The articulated instrumentation of EST will require a sophisticated control software (Telescope Control System, TCS), which will include subsystems such as: a kernel for pointing, tracking, and for the correction of misalignments and structural deformations, a communication interface between the main telescope and an auxiliary telescope (Auxiliary Full Disk Telescope) designed for pointing different areas on the entire solar disk and a control system of the optics for image transfer and derotation.

Access to and use of the wide and varied amount of images produced by EST will entail problems related to archiving, automatic correction and the transfer and dissemination of an enormous amount of information.
The IT logistic coordination for the management of the macroscopic data flows of EST will constitute a stimulating technological challenge that will lay the foundations for the realization of versatile solutions, adaptable to the continuous progress in the scientific field.